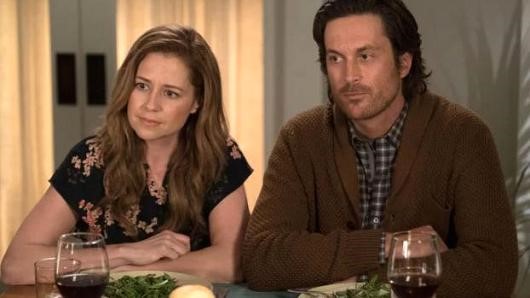 Source: ABC Jenna Fischer and Oliver Hudson from the show “Splitting Up Together”

Where to live following a divorce or separation is one of the biggest questions some couples face.

A trend called bird nesting aims to simplify that problem, particularly when there are children involved. The arrangement occurs when a couple keeps one home for their children and take turns living in it.

And the trend has recently gotten some mainstream attention.

Actress Jenna Fischer of “The Office” is starring in a new comedy titled “Splitting Up Together,” where she and her on-screen husband, played by Oliver Hudson, take turns living in their house with their children.

Actor Josh Lucas discussed his real-life use of this living arrangement with his five-year-old son and his mother on “The Today Show” earlier this year.

“The idea behind it is, look, your relationship didn’t work out between the two of you, so it shouldn’t really be his problem. It should be your problem,” Lucas said, adding that his son “loves it.”

Experts say there are both upsides and downsides if you want to try this at home.

One of the big advantages of bird nesting is the ability to let time pass if you want to wait for the value of your home to go up or for a lease to expire, according to Lili Vasileff, a financial advisor and divorce expert in Greenwich, Connecticut, and author of “Money & Divorce: The Essential Roadmap to Mastering Financial Decisions.”

Because of that, Vasileff said she saw many couples opt for this arrangement more during the financial crisis, though she does still have some clients try this.

Bird nesting is also beneficial for some couples because it allows them time to disentangle themselves from their marriage or partnership.

The biggest benefit could be for the children, who do not have to suffer immediate upheaval in their lives. This situation works particularly well for younger children or children with special needs, according to Vasileff.

“I’ve had nesting arrangements work best when they’re relatively short,” Vasileff said, “and when they’ve had transparency with their children.”

The situation also works more seamlessly for parents who can afford to maintain one central home, as well as two separate living quarters for when each parent is not in the home.

Bird nesting can be a tougher arrangement for couples who are not on the same page.

Financial advisor Michelle Buonincontri, who specializes in divorce at Being Mindful in Divorce in Phoenix, personally tried this arrangement for about three months during her own divorce.

At the time, Buonincontri and her husband kept their New York home. She would stay with her sister while her now ex-husband was in the home; he would stay at his parents’ house when she was there.

But the arrangement wasn’t exactly evenly beneficial, Buonincontri said. While her ex-husband had his own living space and privacy at his parents’ house, she stayed on her sister’s couch.

When Buonincontri returned to the central home, she would often find house work left to be done, which she said made her feel it was being treated as a hotel.

The former couples’ schedules also did not match up. While Buonincontri worked from home exclusively, her former husband wouldn’t return home from work until seven or eight at night.

Because Buonincontri was the primary caregiver and did not have a permanent living situation, the couple eventually put an end to the arrangement by having Buonincontri stay in the home full time.

“Divorce is the death of a relationship,” Buonincontri said. “The arrangement didn’t help out with separateness and healing. It was just more of the same.”

Tips to keep in mind

There are several steps that parents can take to make a bird nesting arrangement successful.

Of utmost importance is making sure your children are comfortable, Buonincontri said, and that they don’t get confused and know that you are not getting back together.

You also want to make sure you have a clear plan for how all of the expenses will be shared.

That should include all the normal overhead — mortgage, taxes and insurance, for example — as well as other things that could crop up, Vasileff said. Talk about everything, from what happens if the dishwasher breaks to how the cleaning staff will be compensated.

You also want to be sure you are very specific about how long this living situation will last.

“At what point does the other party raise their hand and say, ‘This isn’t working for me’?” Vasileff said.

Finally, you want to have clear rules for behavior in the home. That includes everything from rules about not talking negatively about the other parent and the extent to which new significant others will be allowed in the home.

“It’s really important when parents do this that they establish very clear personal boundaries,” Vasileff said.