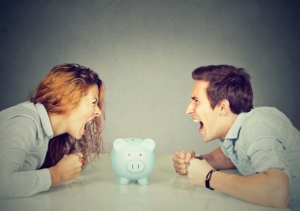 Getting divorced is an emotional roller-coaster. It also can be a real threat to your personal finances.

If you don’t approach your settlement with a clear head and an accurate accounting of your finances, you may find that you can’t afford your new life alone or, just as bad, you could jeopardize the retirement you’re envisioning for yourself in the future.

For those splitting up in their later years or for spouses who worked at home for most of their lives, the financial ramifications can be even worse.

Here’s how to come away with your finances intact after you go your separate ways.

Do a post-divorce budget

Living separately costs a lot more than living together, so it’s key to know what your monthly expenses look like. This is even more important when one spouse has been paying the bills and managing the household budget alone.

Figure out your immediate needs, says Lili Vasileff, author of Money and Divorce: The Essential Road Map to Mastering Financial Decisions.” They may include:

“Start there and gradually work bigger items like saving for retirement or college into your finances,” Vasileff says. “Let the dust settle for three to six months before turning to the long term.”

Manage costs during the divorce

While not as joyful, consider your divorce like any big life event, such as a wedding, says Vasileff. “What costs will you incur, how will you manage them and how will you track them?” she says.

Earmark money that will be used to pay for the divorce itself. Always look at the invoices that you get from the professionals hired, such as divorce attorneys and financial planners, to know what you’re paying for.

It also helps to familiarize yourself with the divorce laws in your state and understand the timeline for the process. That way, you know your options and aren’t surprised if the process drags longer than you initially anticipated.

Divvying up everything you’ve accumulated in your marriage is a lot more complicated than saying: “You take the china and I’ll take the lawnmower.” Some assets are more liquid than others, such as a brokerage account versus a house. So, if you need more liquidity, taking the house may not be your best move.

You also need to consider the tax implications of each asset. Funds in some qualified retirement accounts are pre-tax and some aren’t, so one dollar in one account is not the same as a dollar in another.

Additionally, when splitting up retirement accounts, take into account how much of the funds are pre-marital versus post-marital assets, he says.

If your marriage lasted 10 years or longer, you can get Social Security benefits based on your ex-spouse’s record, which may be higher than what you would receive. This is especially beneficial for stay-at-home spouses or those who earned less during the marriage.

If you share debt with your soon-to-be ex-spouse, it’s best to eliminate it before finalizing the divorce if possible.

“Carrying debt when you have a new, more expensive living situation than before, it can be hard to keep up with the debt payments,” says Beth McClelland, principal of East Bay Divorce Financial Planning in California.

Joint debts also remain both party’s obligation in the lender’s eyes, even if the divorce settlement says only one spouse is responsible for paying it back. If that spouse fails to make the payments, the default will show up on the other’s credit history, too.

If the debt can’t be paid off pre-divorce and becomes only one spouse’s responsibility, the other should continue to have access to the account’s history to make sure it’s being paid as agreed, says Michael Resnick, a certified financial planner in Illinois.

That should be stipulated in the divorce agreement. For credit cards, close the account altogether, so no new purchases can be made on it while the outstanding is being paid back.

What about the house?

If the house is going to one spouse, but it still has a mortgage on it, then it’s ideal to refinance the home. That way, the spouse who gets the home – and as the title to it – also is responsible for the debt securing the house.

In many cases, one spouse can’t qualify for a refinance on their own or afford to buy out the other spouse’s share in the home. In that case, both spouse’s names should remain on the title, even if only one is responsible for paying the mortgage.

Schiffer recommends thinking about all that’s involved in taking the house.

“It’s a big expense and you may not need as much square footage,” he says. “When a spouse wins a house, it may not be the best outcome when they find out the cash flow they need to support it.”

What about the kids?

If you have children, especially if they are close to graduating high school, it’s important to be very clear about what each parent is willing to cover in college costs, says Marguerita Cheng, CEO of Blue Ocean Global Wealth.

“I have personally observed this on at least three separate occasions when one spouse was stuck paying out-of-state of tuition or, worse yet, private school tuition,” she says.

Many financial documents and accounts need to reflect that you’re now divorced.

Gray divorce, defined as divorcing couples who are 50 and over, is on the rise, even as the overall rate of divorce is declining. These pose their own unique challenges, including the risk of death, says Mark Prendergast, a certified financial planner in California.

For instance, Prendergast worked with one couple where the husband was 82 and the wife was 71. The husband was in poor health. “What might happen if he died in the middle of divorce and he didn’t want his wife to inherit house? What can he do?” he says.

In those cases, it’s important to break joint tenancy on assets they both own. Without it, if one spouse dies, the other automatically inherits the other half – known as the right of survivorship. By breaking the joint tenancy, each spouse can choose who inherits their half after they pass.

It’s also important for older divorcing couples to establish new powers of attorney and health care directives, so their soon-to-be ex-spouse isn’t responsible for making financial and medical decisions if they should become incapacitated.

Your divorce settlement should have contingencies in case something goes awry, such as if a spouse fails to pay support or become disabled. You can insure yourself against those kinds of events by making sure the divorce includes a claim on life insurance or an estate.

“Many times people don’t look on the dark side and ask what happens if,” says Vasileff. “But those kinds of protections should be in there as well.”