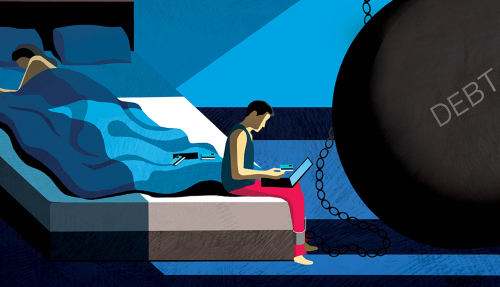 Ten years have passed, and Lisa*, now 60, still asks herself, Why didn’t I see it coming?

At the time, she and her husband, Andrew, were living well: a spacious home in a Chicago suburb, overseas travel, a kid in private school.

For more than 15 years, Lisa, a successful doctor, had trusted the family finances to Andrew. Money was her husband’s domain, she made clear to their financial adviser.

Which is probably why that adviser waited until their finances were a dumpster fire before he called: “Lisa, do you know what your husband is doing?” Andrew had spent huge chunks of their savings on cars, guitars and charitable gifts. He had borrowed against their home and run up $250,000 in credit card debt. Very quietly, he had nearly wiped them out.

Lisa divorced him. The two remained civil. But last year Andrew went to Lisa with a request. He had $60,000 in credit card debt and might have to sell one of his prized guitars. Could she spare some cash to tide him over?

“My jaw was on the floor,” Lisa says. “I thought, Can I divorce him again?”

When we think of infidelity, our minds go straight to the bedroom. But infidelity can hit the pocketbook and wallet, too, when one spouse spends, borrows, withholds or hides money without telling his or her partner. Such financial infidelity can damage a marriage just as much as the sexual type, if not more so. As one woman, 70, recalls about going nuclear on her husband for secretly borrowing tens of thousands of dollars: “He said to me, ‘Don’t I get credit for being faithful to you?’ And I said, ‘No! I would have much rather you had sex with an intern. At least that I would have understood!’ “

You may think that the older you are and the longer you’re married, the harder it is to hide a big financial secret. But no: A recent major study in the Journal of Consumer Research — one that surveyed people ages 19 to 83 — found similar rates of financial infidelity among young and old. (Infidelity was consistent across genders and wealth also.) “I just spoke to a 61-year-old client whose husband of 28 years quit his job and traveled with funds he had moved from their joint investments to a PayPal account in his name,” says Jan G. Valecka, a financial planner in Dallas. “He also inherited money from his mother in 2015, and my client never knew.”

Technology has made financial infidelity easier, says Indiana University marketing professor Jenny Olson, coauthor of the new study. Mobile banking can be done with no paper trail of statements; online shopping results in emailed receipts, not hard copies. “Examples are plentiful,” she notes.

Older Americans are particularly vulnerable if their partner is dishonest about money. “There’s less time to make up savings,” says Lili Vasileff, a financial planner in Greenwich, Connecticut, who specializes in divorce-related finances. “And, of course, you’re probably closer to retirement.”

Financial infidelity — call it FI for short — appears to be widespread. A 2018 Harris Poll survey found that 41 percent of Americans who combine their finances with a spouse or partner admit to some form of misbehavior. An even bigger proportion of partnered people, about 75 percent, say that a relationship has been affected by financial deception.

Some stealth might not qualify as FI — say, the daily Frappuccino you don’t tell your spouse about. Other occasional indulgences might merely be misdemeanors. “I definitely took shoes out of the shoebox before my husband came home so he wouldn’t know I’d been shopping,” admits Moira Lawson, 60, a health-policy executive in Baltimore.

At the other end of the spectrum are major offenses — actions that, when they blow up, threaten a couple’s financial security. That could mean borrowing or spending thousands of dollars, or cheating on taxes without a spouse’s knowledge. It could even mean scheming to undermine a current spouse’s future finances, says one financial adviser. Some of her female clients’ husbands secretly established residency in states with no minimums for child support or alimony, so if the marriage went south, they wouldn’t have to pay up.

Financial experts, therapists and divorce lawyers agree: The reasons for FI tend to fall into several key categories. Here are seven of them.

Drugs, shopping, gambling — just about any type of compulsion that requires cash — can be the spark. “Addiction, and the shame that can go along with it, is one of the most common reasons for financial infidelity,” says Jane Greer, a New York City psychotherapist and author of How Could You Do This to Me?: Learning to Trust After Betrayal.

Carol, 61, a teacher in New Jersey, says that once her husband, Steve, kicked a drug addiction, he replaced it with a shopping habit: “When we were $30,000-plus in debt, and I was selling books to raise train fare to work, I used to find price tags from Steve’s secretly purchased designer clothes deep in the recesses of the closet, the way you might find empty bottles if your spouse was an alcoholic.”

FI can be payback when one spouse feels betrayed. Tom, 63, a sales executive in Miami, says his wife became irate after he had a financial setback. “When I asked for us to economize a bit, she acted as if I was breaking our marriage vows,” he remembers. Her spending skyrocketed — she went behind his back to lease a BMW — until Tom decided his only chance for solvency was divorce. “It stopped the hemorrhaging,” he says.

In this Instagram-crazed world, where everyone’s life looks better than yours, a money shortage can feel like a disgrace you have to hide. Robin learned this after she and Mark, both in their 50s, had dated for a couple of years, then started sharing her New Jersey apartment. “He was a charming business guy, very well dressed,” Robin recalls. “His house with his first wife was gorgeous.” Then, however, Mark’s facade collapsed. He had gone bankrupt. His current work was quasi-illegal. “I don’t think he was trying to scam me,” Robin says. “But he completely misrepresented himself.”

Older couples often disagree about supporting adult children. “We all know how hard it is to watch our kids struggle,” notes New York City lawyer Jacqueline Newman, author of The New Rules of Divorce: Twelve Secrets to Protecting Your Wealth, Health, and Happiness. “So, one partner will fund the kid secretly.” Recently she was involved in the divorce of a couple with an unemployed adult son, to whom the wife had been sneaking money. When the husband found out, he cut off the son, not restoring the money — even when his son had to sleep in his car — until he got a job. “Admittedly, it was a very nice car,” Newman adds. “But the point is that during the marriage, the son had been a major source of secrecy and lies between the parents.”

Secret hoarding or spending can fulfill a deep emotional need, says Ed Coambs, a marriage and family therapist in Matthews, North Carolina, who works with couples in financial crisis. Often, he explains, this behavior is not just a matter of deception but a coping mechanism stemming from childhood. Money hiders, for example, may come from families with boom-and-bust finances, never knowing whether they’d be living it up or scrimping. As adults, he says, they might revert to their childlike emotional mindset.

Sexual infidelity and the financial kind can easily go hand in hand, in part because the money for the incidental expenses has to come from somewhere — secretly. But even if financial misbehavior isn’t funding the extramarital sex, they’re often linked, Vasileff says. “It’s easier to be unfaithful in general,” she points out, “because the lies create isolation in the relationship.”

“Sometimes if your partner is very controlling, you can’t reason with that person,” Greer observes. “By siphoning off money, you are not only taking care of yourself but separating yourself emotionally from a fraught situation. Several patients I work with have filtered money given to them for the household to secretly pay for therapy.”

A money-cheating partner can leave you feeling duped and foolish. “If you’re married, you think of yourself as a team,” says one woman who, when she was 60, learned that her husband had clandestinely borrowed more than $100,000. “But when there’s financial infidelity, it’s like you’re both in this leaky rowboat, you’re rowing frantically, and your mate is seated behind you chopping holes.”

And you can pay the penalty for your spouse’s sins. With few exceptions, that debt your husband racked up playing the ponies? Half of it is yours, says New York City divorce attorney James Sexton. (If the IRS comes after you because your spouse lied on your taxes — and you didn’t know or have a reason to know — you may be able to get relief.)

If you suspect that your spouse has been financially unfaithful, your first step, Greer advises, is to tell your partner about your concerns in a loving way — as much as is humanly possible. “You don’t start with the accusatory ‘You,’“ she says. “Instead, it’s ‘I have been thinking X. I am worrying because Y. This is how I’ve been feeling.’“ Greer adds, “You might be mad as hell. But your anger, however righteous it is, will probably only lay the groundwork for more lies.”

Get credit reports for yourself and your partner. If you suspect he or she is lying, these are effective tools for learning whether any loans you don’t recognize have been taken out in either of your names. If you have a financial adviser you never talk to because that’s your spouse’s job, the three of you need to sit down for what could be a painful discussion.

While serious financial breaches often end in divorce, couples can and do survive. Such was the case with Sharon, now in her 60s, a former executive in Los Angeles. Early in her marriage, she’d had an affair, but she and her husband, Travis, stayed together. Years later, when they were both unemployed, Travis caused them to lose most of their possessions, which were in storage; he’d failed to pay the monthly fees, then secretly tried to catch up but couldn’t bring himself to tell Sharon about the shortfall until it was too late. The two, still struggling financially, remain married. “I must forgive him,” she says, “as years ago he forgave me.”

After all, there’s more to a relationship than money—though money can say a lot about a relationship. After Carol divorced her shopaholic husband, she fell in love with Alex, the man who is her spouse now. One thing that attracted her to Alex, she says, was the respect he had for her feelings — including, crucially, her feelings about spending and saving money. “Only then did I realize how little I had been cared for in my first marriage,” Carol reveals. “Someone who doesn’t consider how their financial behavior affects their partner isn’t behaving in a loving way.”

*Some names and identifying details in this article have been changed.